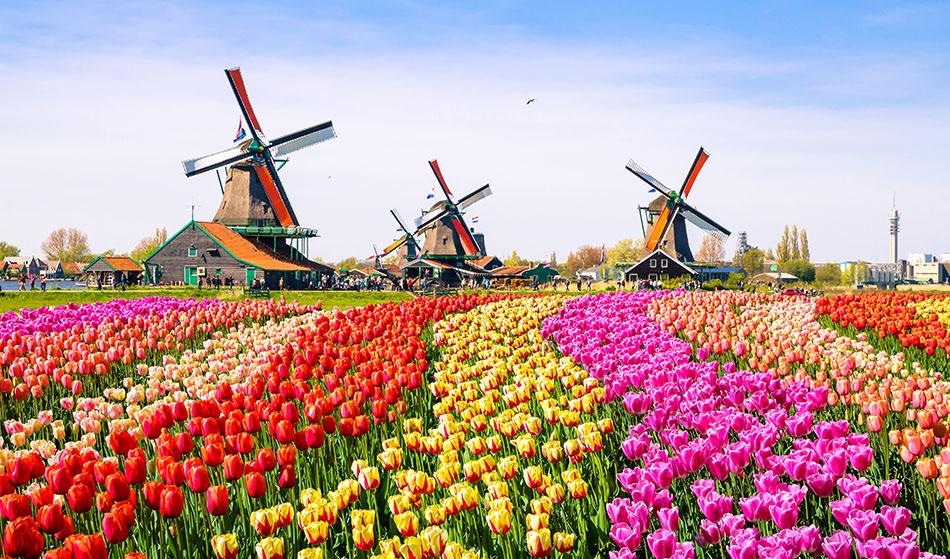 Bordering the North Sea between Belgium and Germany, there is a delicate balance between land and sea in the Netherlands, with around half of the country lying below sea level and much of the land having been recovered from the sea. To protect against flooding, there is a vast network of dikes and dams.

The growth of the country’s population and economy has put increased pressure on the environment. Air and water pollution are of particular concern for the Netherlands, as the country’s rivers are particularly polluted by agricultural activity. Heavy metals, organic compounds, nitrates and phosphates constitute a large part of this pollution problem. Overall, however, the water quality in the Netherlands is excellent, with its public drinking water supply being one of the best in Europe.

The main environmental issues affecting the Netherlands include loss of biodiversity, climate change and overexploitation of natural resources. Habitat fragmentation, nitrogen deposition in the atmosphere and loss of bird populations from farmland are still felt despite national measures to address these issues. Many of these problems are due to the extensive agricultural transport in the Netherlands, which has grown considerably in recent years.

According to the summary of the Organization for Economic Co-operation and Development (OECD), there is a need for the Netherlands to improve the profitability of its environmental policies, to study environmental concerns and to reflect them in positive social and economic decisions.

In 2014, the Netherlands was one of the first countries in the European Union to present an agenda for a circular economy, which received good support across the country and is considered a major example of its kind in the world. ‘EU.

According to a study by the Dutch Environmental Assessment Agency (PBL), the country spends 31 billion euros on damage to the environment caused by the release of harmful substances. Almost 98% of all calculated environmental damage is due to air pollution, especially greenhouse gases like CO2 and CH4 (methane).

As is common, traffic and transportation are the primary source of these air pollutants and the resulting environmental damage. After transport, the agricultural sector comes second for causing the most environmental damage. This sector costs the country 6.5 billion euros in damage each year, with half the damage caused in particular by ammonia.

In recent years, subsidies and exemptions for oil and natural gas have been removed and carbon dioxide taxes are increasingly common.

Recycling can be done in supermarkets where there are deposit systems for baby bottles and other plastic and glass containers, and numerous curbside recycling units exist throughout Holland. In Amsterdam there are a good number of recycling bins for paper and glass. Small businesses in particular are becoming more circular and overall the recycling rate for municipal waste is among the best in the European Union.

The country mainly produces its electricity from gas and coal, but the use of renewable energies (wind power in particular) has increased in recent years. Wind turbine installations have grown steadily over the past decade, with 2009 reaching a capacity of 2,225 megawatts of wind power increasing to 4,471 megawatts in 2018.

By 2020, the country aims to produce 37% of its electricity from renewable sources.

The Netherlands being a small country, it is easy to get around by bus or train. It is also a prolific cycling country, with more than 13 million bicycles and 15,000 kilometers of cycle paths.

Amsterdam’s city council plans to ban cars and motorcycles that run on gasoline or diesel from 2030 in order to reduce air pollution in the city. This also includes a reduction in buses and coaches that emit exhaust fumes from 2022, and by 2025, the ban on gasoline and diesel will extend to some boats using the canals, and mopeds. . It is part of the air quality action plan.

Citizens are encouraged to use electric and hydrogen cars instead of gasoline and diesel powered ones.

Disclaimer: The opinions expressed here are those of the author, expressed in a private capacity and do not necessarily represent the views of AZoM.com Limited T / A AZoNetwork, the owner and operator of this website. This disclaimer is part of the terms and conditions of use of this website.