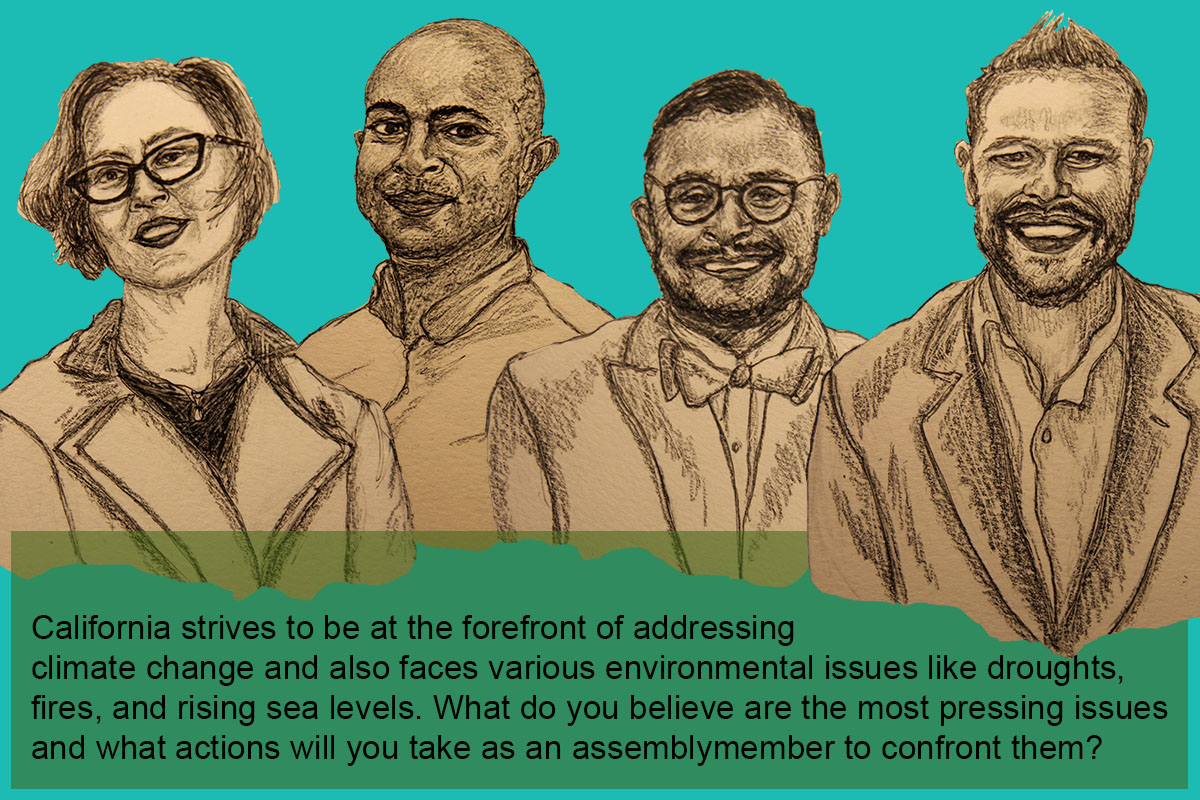 California is striving to be at the forefront of the fight against climate change and also faces various environmental issues such as droughts, fires and rising sea levels. are the most pressing issues and what steps will you take as a member of the assembly to address them?

The most pressing problem in our fight against climate change is politicians who say the right things but give in to special interests and sell the future of our planet in exchange for massive campaign funding.

We need unprecedented investment in clean energy, public transit, wildfire prevention, coastal resilience and green jobs. Believing that we need these things is not unique. What stands out to me is that our campaign did not take a dollar from corporate or pro-fossil fuel interests. I can fight to ban fracking NOW and not worry about the backlash. You can be sure that I will stand up to the oil companies and demand that they stop destroying the planet, stop irresponsible developers from degrading our environment, do not allow polluters to put their profits before the health of our communities. And that’s why the Sierra Club uniquely supported our campaign.

Climate change is the greatest existential threat we face, and it is already impacting our daily lives. We cannot just commit to action by 2030 or 2040; change must start today. Within the Assembly, I undertake to:

California is struggling to make progress in the fight against climate change, due to costs and bureaucracy. It is too expensive to electrify the homes of an average resident and it takes too long to build public transport. I co-authored a Green New Deal for California, with former AOC chief of staff Saikat Chakrabarti, to address these challenges.

This includes a green production council to set production targets on the number of affordable housing units, bus rapid transit, solar panels, etc. that the state must achieve, and be granted the power to reduce any bureaucracy necessary to achieve these goals. It includes a California public bank to provide interest-free loans of up to $100,000 to individuals to buy electric cars or bikes, and to businesses to upgrade their infrastructure.

This approach will drive an influx of investment to transition California to a zero-carbon economy and help us achieve a 1.5° Celsius reduction by 2030.

Reducing carbon emissions in California and around the world is the responsibility of every government. In San Francisco, 47% of carbon emissions come from transportation. We cannot fight climate change without tackling this problem. I have been working on a progressive revenue-generating transformative transportation measure that will be voted on in 2024 to launch our new green deal. This will help us get people out of their cars with reliable, affordable and accessible alternative transportation. We will need to draft legislation – I am ready to sponsor it as a member of your assembly. I will also educate and work with assembly members to appropriate the remaining $4.2 billion that we the people approved in 2008 as a down payment for America’s first high-speed rail. We can leverage those funds through the federal infrastructure bill.

2022-02-04
Previous Post: Community and environmental issues highlight Mayor of Salt Lake’s 75 goals for 2022
Next Post: Environmental factors and their role in the transmission of SARS-CoV-2