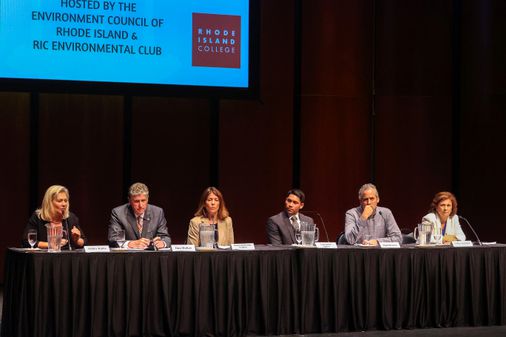 Here are some of the issues they tackled:

Climate change was at the forefront of Tuesday’s forum. The candidates agreed that this was the state’s most pressing environmental issue.

Get the Rhode Map

A weekday briefing from seasoned Rhode Island reporters, focused on the things that matter most about the Ocean State.

But what can we do about it? Kalus, for his part, highlighted things like leadership on offshore wind and sustainable aquaculture.

Foulkes mentioned helping cities and towns with resilience plans, like what Warren and Providence are doing.

Brown said he shut down the fossil fuel industry in the Port of Providence, a theme he returned to throughout the night, pointing to its disproportionate impact on underserved communities. He used the port and the oil industry in general as a point of attack against McKee and Gorbea. He noted that the lobbyist for Sea 3, which is proposing to expand into the port of Providence, made a donation to McKee and that Gorbea benefited from a fundraiser organized by a lobbyist whose clients included companies in the fossil fuel industry. Brown challenged them to return those donations. When asked if he wanted to respond, McKee declined.

Gorbea replied to Brown, “I am committed to absolutely working for the people of Rhode Island and making sure we have a government that deals with climate change. These are diversionary tactics that you and your followers use to avoid the real work. And it’s great to stand up. It’s great to do gotcha moments. But in the end, what we really need are elected officials who will do the job.

On climate change in general, McKee highlighted what his administration has already done in the year and a half or so since taking over from outgoing Governor Gina Raimondo: signing the Climate Legislation Act, a new offshore wind market and reactivate an executive. climate change committee.

“Providing leadership when it really matters – that’s what we did,” McKee said.

Candidates were also asked if Rhode Island should follow the lead of states like Massachusetts, which announced plans to require all cars sold in the state to be electric by 2035. McKee and Foulkes said said they would be willing to set a certain date for the phasing out of gasoline-powered cars; Gorbea said she would “absolutely support” setting a 2035 date; and Muñoz and Brown both said they would be open at an even earlier date than Massachusetts. Kalus did not support him, saying she believed in choice rather than mandates.

“If we set a date too soon, what you’re going to do is create a negative incentive for individuals to leave the state to buy gas-powered cars,” Kalus said. “And if that happens, it will hurt the auto industry, local dealerships in Rhode Island, and it will hurt the sales tax as well.”

The CRMC is a short-staffed and underfunded state agency that plays an outsized role in regulating the state’s environment and addressing the broader challenges of climate change. He approves or disapproves of everything from coastal rights of way to oyster farms to wind farms. But while its professional staff are generally respected for their work, its politically appointed board has sparked controversy over the years.

Foulkes said she would blow up the agency. She would eliminate the politically appointed board of the CRMC, she said.

“He’s the ultimate example of, you gotta know a guy like this,” Foulkes said. “It is a scandal.”

Muñoz also took aim at the CRMC. He cited failure to meet legal requirements for appointees as an example, something he done in the past.

“We need a whole new board,” Muñoz said.

McKee said the CRMC had “room for improvement,” but he didn’t want to offend those currently serving on the board, signaling he was less than receptive to the more fundamental change Foulkes is calling for.

“But at the end of the day, it’s really about the leadership that’s exercised on them,” she said. “So you need a governor who actually takes environmental policy to heart and ensures that our environmental policies are based on data and science.”

Who they would consult on environmental issues

Fitzpatrick ended with a flash: If you could call anyone in the world for environmental advice, who would it be?

Gorbea: Johnathan Berard, an assistant who previously worked as a state director for Clean Water Action.

Muñoz identified several: Bella and Randy Noka, who are members of the Narragansett Indian tribe and attended Tuesday’s forum, and journalists John Manock and Steve Ahlquist.