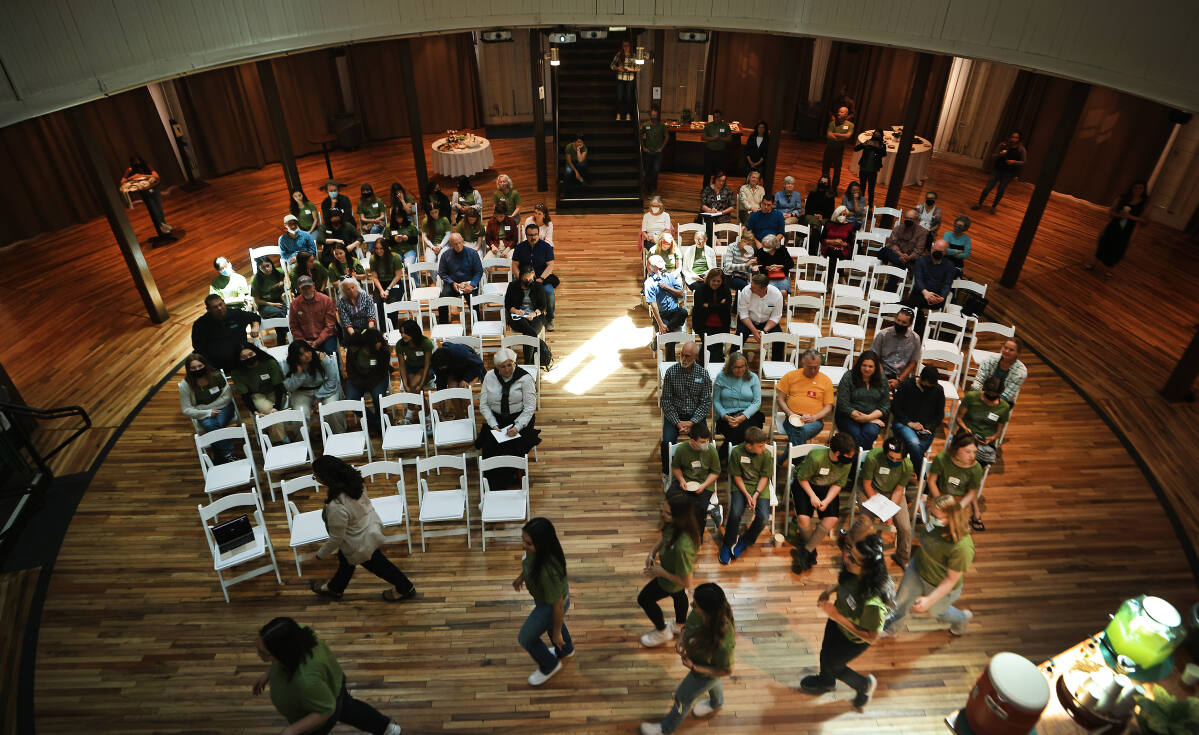 Over the course of one school year, dozens of ambitious Sonoma County middle and high school students tackled local environmental issues ranging from the use of pesticides in vineyards to the effect of landfills on the quality of the air.

The 58 students from nine county schools were part of the Sonoma County Education Office’s first Environmental Justice Coalition, which began in September and resulted in research and youth-led action.

On Thursday, the students presented their projects in a “sharecase” at the DeTurk Round Barn in Santa Rosa, where four groups received grants of up to $1,500 to continue their work.

The program was designed by the Office of Education to support and empower the younger generation, who stand to suffer the most from worsening environmental crises in their lifetime, including escalating wildfires, floods historic droughts and droughts.

Another mission was to foster civic engagement and inspire partnerships with disadvantaged communities that have been disproportionately affected by environmental damage and disasters, said Matt O’Donnell, technology innovation specialist for SCOE. .

“It gives me hope,” O’Donnell said. What impressed him the most was seeing all the students giving up their free time to delve into local environmental issues, even at the height of the omicron wave.

At Thursday’s event, an audience of about 50 watched the students’ short videos describing their research and findings. Afterwards, the students gathered around information posters they had made to answer questions.

Quinn Shioda, 17, a senior at Technology High School, wrote about the coalition in her application essay for UC Berkeley, which she will attend in the fall.

“I talked about learning to use my voice,” Shioda said.

She added that the coalition has also taught her that “making a difference can be small acts at the local level”.

Her group, “The Green Girls” of Technology High School, tested the air quality in different neighborhoods near the central dump on Mecham Road west of Petaluma and compared it to the air quality at higher altitudes. They have also created an informative website on the matter.

A Windsor High School group also tested air quality, but for vineyard workers, who often have to harvest when air quality reaches dangerous levels during wildfire season. They received a $1,500 grant to purchase air quality index monitors for workers.

The ECO2school Youth Leadership Program team has been researching waste management issues and is coordinating a community waste education event on May 17 at 4:30 p.m. at Chop’s Teen Club in Santa Rosa.

Many of the students who first met only a year ago to brainstorm their topic ideas came away feeling more confident in their ability to create tangible change.

Many also enjoyed connecting with other young people who wanted to do the same.

Jesenia Garcia, a senior in the ECO2school youth leadership program, said her favorite part of the coalition was meeting and working with other students who are passionate about environmental issues.

The best part was “realizing what we can do now,” Garcia said.

Willowside Middle School’s youngest coalition group created a video raise awareness of the pesticides used on Graton’s farms and their harmful effects on humans and animals.

“This generation inherited a bunch of problems that we didn’t start with,” said Willowside eighth-grader Alexis Padron. “So it’s good that we find different ways to fix it.”

You can reach editor Alana Minkler at 707-526-8511 or alana.minkler@pressdemocrat.com. On Twitter @alana_minkler.

2022-04-29
Previous Post: What environmental factors affect the implementation of the Manchester Healthy Schools program? A qualitative exploration of staff perspectives
Next Post: Aligning fashion with environmental issues — The Santa Clara