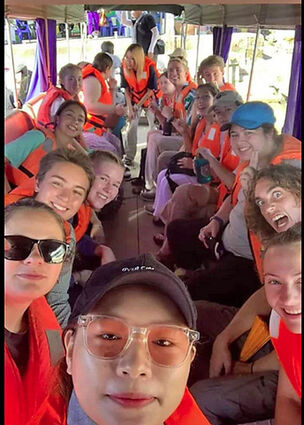 Sponsored by the United States Embassy in Vietnam, the exchange included 25 students from Montana and Vietnam. All Montana students involved in the exchange were enrolled in Missoula County public schools. SSHS students and graduates who participated included Cora Stone senior and 2022 graduates Crystal Lopez and Will Batchelder.

The goal of the program was to share environmental and natural resource issues between the two countries and celebrate common interests between American and Vietnamese youth.

“It was just another step in reshaping the US-Vietnam relationship,” Stone said. “I think it’s important to do programs like this and I think it adds something more human to the experience because it allows you to meet these students and build friendships.”

“I care about the environment,” Lopez said. “I also want to do overseas exchanges in the future, so it was a good choice.”

Compared to previous years, this exchange was slightly different.

The program consisted of three components. The first installment was a virtual exchange in the spring of 2021. University of Montana staff and 25 students, Vietnamese partners, and faculty met on Zoom to discuss American and Vietnamese culture and society, the cross-cultural communication and environmental issues in both countries.

In the second part of the program, American students traveled to Vietnam for two weeks.

SSHS students landed in Hanoi, the capital of Vietnam, on July 16. They traveled across the country to learn about their culture, their food and participate in several environmental projects.

“There was a lot of smog in the cities and it was really foggy over the ocean,” Stone said. “I was just really sad because it’s such a natural and beautiful place.”

The students said they planted more than 200 mango trees in one day and were able to visit a Buddhist monastery. Their most memorable moment during the trip was a trek through the jungle, where they encountered ground leeches, a distinct group of annelid worms native to rainforests around the Indo-Pacific.

The students said that when they asked if there were leeches in the rainforest, the guide confused the word leech with lychee, a popular fruit grown in Vietnam, and told them not to worry. “leeches”. Soon after, they were ambushed by ground leeches.

“A bunch of leeches just started crawling up our legs and ankles,” Lopez said. “They started falling from the trees on our foreheads and arms.”

Despite the sometimes unexpected adventures, the students said their hosts were very accommodating and welcoming. Upon arrival, they were greeted with traditional Vietnamese dishes, including dehydrated and pickled jellyfish, snails and lychee. They said they formed friendships with the other Vietnamese exchange students during their stay.

“They all have such a great sense of humor,” Lopez said. “They are so polite and welcoming. Personally, I have never been so welcomed in a community before meeting the Vietnamese students.”

Now that SSHS students have returned, they welcome Vietnamese students to the United States under the third stream of the program. On August 10, the students gathered for a hike to Holland Falls. Similar to what American students did in Vietnam, Vietnamese exchange students traveled through Montana to learn about environmental issues facing the United States.

While the program only lasts until the end of the summer, some of the SSHS students said they hoped to pursue something environmental in their careers.

Students from Montana and Vietnam on a boat in the Mekong Delta to meet a local who owns a hatchery.

With one year left in high school, Stone said she doesn’t know where she wants to go or what she wants to study, but she hopes to make a difference on the environment.

Lopez, who will be attending UM in the fall, plans to major in parks, tourism, and recreation management with a minor in climate change studies, but said she’ll likely narrow her major down to something different. environmental. She said the trip really changed her understanding of larger-scale environmental issues.

“It was like a completely new perspective,” Lopez said. “I just have to see it in a tiny new light of what it is and it feels good to make so many different connections with the students.”

To learn more about the exchange program, visit https://www.umt.edu/mansfield/high-school/vietnam-hs-exchange/