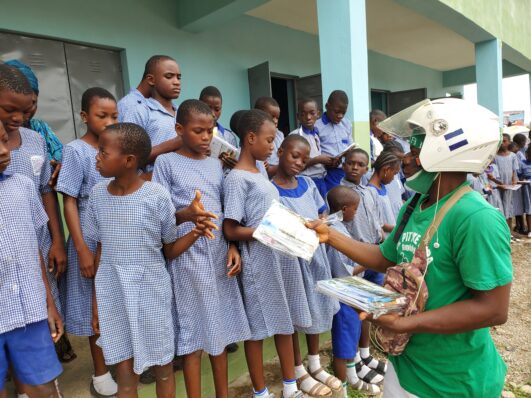 The UN seeks to invest in the environmental education of children

The United Nations Resident and Humanitarian Coordinator in Nigeria, Mr. Matthias Schmale, has called for adequate investment in environmental education for children to support the fight against climate change.

Schmale said so in his speech at the inauguration of the United Nations Climate Action Superheroes, in commemoration of World Environment Day 2022 on Monday, in Abuja.

The event was organized by the Digibrands GreenhubAfrica Foundation, in partnership with the United Nations Information Center in Lagos, to spread environmentally sustainable practices.

According to him, UN Secretary General Antonio Guterres while in Nigeria said that based on the reports the UN had commissioned and received, there was an urgent need to preserve the planet.

Schmale said, “Global warming is increasing at a rate that is unsustainable; there is a sense of urgency, we need to protect the land we have.

“We have no alternative, we can’t all go to the moon; we need to make sure this planet stays livable, so that’s the first message.

“The second message is that, as Guterres said, unfortunately policymakers have failed so far, they haven’t done enough.

“I think the importance of having children here today is that we hope they will see through the work that they have done in the project that we have seen.

“Children are the guardians of the future, if we invest in them and bring them to the table now, we may have a better chance of winning this race against time.”

Speaking at the event, the Chairman of GreenhubAfrica’s International Advisory Board, Prof. Obas Ebohon, urged the Federal Government to create an enabling environment in which stakeholders can actively participate in the fight against climate change.

“Government has a primary role in establishing a level playing field, where every citizen, cooperation and business play by the rules, the issue related to climate change is huge.

“That’s why we need the government to implement rules and regulations that will allow us to internalize our costs and benefits of using the environment; the role of government is fundamental.

“Government alone cannot manage itself and therefore the whole concept of Agenda 21, which brings everyone and governments together with the responsibility to participate in global environmental sustainability.”

He added that the concept of environmental sustainability has become important to ensure intergenerational equity and accessibility in the face of the situation.

In the same vein, Education Minister Adamu Adamu stressed the need to safeguard the natural environment for the young and future generation.

Adamu was represented by Ms. Uche Onwuama, Deputy Director in charge of Multilateral Affairs in the Education Support Services Department of the Ministry.

According to him, “there is a need for collective consciousness in daily actions to protect the available resources that God has provided for all.

“As you know, education is an essential agent in the fight against climate change; education can encourage people to change their attitude and behavior and help them make informed decisions.

“The international community is aware of the importance of fighting climate change through education. Therefore, call on the government to educate, empower and engage stakeholders on climate change policies and actions.

“Such as the policies of the United Nations Framework Convention on Climate Change, the Paris Agreement and the associated Climate Empowerment Action (ACE) programme.”

He reiterated that the ministry will continue to work closely with all relevant environmental actors in responding to the UN’s call to ensure land security.

For his part, Senator Gershom Bassey, a senator representing the senatorial district of Cross Rivers South, assured that the 9th National Assembly will do everything possible to give priority to bills that concern the environment.

“One of the first things we did was the Petroleum Industry Law, which the 9th Assembly enacted after 20 years of delay in the National Assembly.

“We passed the bill and the president signed it into law; Key to this bill is the issue of environmental degradation as it relates to oil and gas exploration and production.

“We are very happy to have been able to resolve this issue, you can rest assured that any other issues in similar areas will be taken seriously,” Bassey said.

Meanwhile, Mr. Henry Bassey, CEO of the GreenhubAfrica Foundation, said catching children in their early stages of life has become essential to ensuring the survival of the planet down the line.

He said, “What we have done is conceptualize this asset for Nigeria and for the rest of Africa; there are eight superheroes who deal with the critical issues of climate change in Nigeria and Africa.

“From biodiversity to sea level rise and smoke; so each superhero addresses different issues that we face in Nigeria today.

“The beauty of launching the climate change superhero is that we’re really involving kids in an educational way, through our outreach, and that they’re making decisions that help them protect the environment.”

The 2022 edition of World Environment Day, with the theme: “One Earth”, was celebrated on June 5.

The day is marked annually for the 50th year since the first United Nations conference in Stockholm, Sweden, in 1972. (NAN)