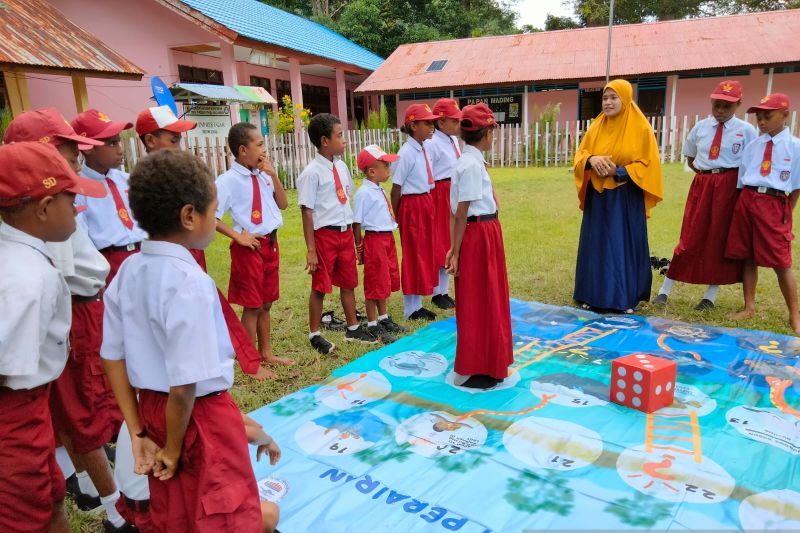 Environmental education is crucial for communities today to educate them to preserve nature for the sake of future sustainability.

In order to instill a sense of love for nature and caring for the environment, environmental modules are taught from early childhood in Fakfak district, West Papua province.

In collaboration with the Fakfak Mengajar Institute, which involves young people in Fakfak to raise awareness of the importance of education, YKI promotes the realization of PLH.

A member of Fakfak Mengajar, Kartika Dwi Cahyanti, told Fakfak on Thursday that his camp is working to promote educational actions in the two coastal parks by training teachers.

According to Cahyanti, the environmental education modules created by YKI were handed over to Fakfak Mengajar to conduct training sessions for primary school teachers in Fakfak marine conservation areas.

She noted that after the training, teachers are expected to teach the material to their students.

Cahyanti explained that the PLH program is for elementary school children in grades four through six.

The targeted students are those living in the villages of Teluk Berau and Teluk Nusalasi-Van Den Bosch. Environmental education is not exclusive to these upper class students, as she said, students in grades one through three are also included.

Furthermore, Cahyanti pointed out that the PLH training program is not only taught to primary school teachers in the Fakfak conservation areas, but also to the community and traditional leaders to participate in the education of children.

“The program is already underway and all elementary schools in the Teluk Berau and Teluk Nusalasi-Van Den Bosch marine conservation areas have received the PLH,” she said.

Meanwhile, staff of the Indonesian Conservation Foundation for Environmental Education and Conservation Education, Fitriyanti Killian, said Fakfak district has two marine conservation areas which continue to be maintained, so that can be enjoyed by future generations.

She noted that in order to preserve the two areas, the foundation is working with Fakfak Mengajar to teach children about the sustainability of water and forest ecosystems.

Killian pointed out that the module model is about learning while playing outdoors using tools that make it easier for children to understand how to care for marine life and protected animals.

The module is called “from the mountain to the sea”, with topics ranging from teaching about protected land animals to protected marine animals, she noted.

Additionally, the material talks about keeping water clean as well as “where the garbage goes”.

Specifically, in the material “where the garbage goes”, children are invited to play in the mountains to see people throwing garbage in natural areas where the garbage flows into the river and the sea and ends up damaging the environment. coral reef ecosystem.

Therefore, she noted that environmental and conservation education is useful in enlightening children, as she considers them to be quite innocent and those who have been educated can immediately scold adults who pollute. earth through acts such as littering.

She also expressed her optimism about the inclusion of the environmental education module in the local curriculum of every elementary school in Fakfak.

Support for the environmental education of miners residing in the Fakfak district is also encouraged by the Kitong Bisa Learning Center or KBLC, with the “Our Generation Conserves” movement.

A KBLC official from Fakfak district, Fuad Uswanas, said that in the movement to create an environmentally conscious generation, his side is cooperating with the Indonesian Conservation Foundation.

According to Uswanas, the ongoing program under the collaboration aims to provide environmental education materials to campus students and elementary school students on the importance of preserving nature for sustainable living in the future.

“We will continue to campaign for the importance of protecting the environment, such as not littering and reducing plastic waste for the younger generation in Fakfak district,” he added.

“One of the issues that needs serious attention from all parties in Fakfak district is the problem of plastic waste,” she pointed out.

To that end, Hindom has been pushing for the plastic waste reduction movement which will impact the diversity of marine life.

“I urge all communities to reduce the use of plastic and not throw plastic waste into the sea which will have an impact on the destruction of coral reef ecosystems and the life that surrounds them”, he said. she concluded.